Sharing Love & Compassion to our Orphans in Transnistria

For Years, CHRF has been proud to sponsor different children who have been orphaned in the impoverished country of Transnistria, adjacent to Moldova in Eastern Europe. Thanks to our CHRF Donors we are able to help and support young girls in finding a new home and family where they will find food, shelter and most important of all, love. 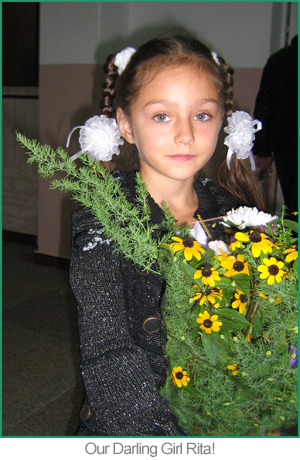 Why this project? In a country where an estimated 60% of female orphans will grow up to be prostitutes and when 70% of orphaned boys turn into criminals, Children’s Hunger Relief Fund will not idly stand by without doing something to help these innocent young orphaned children!

Many of the precious children are often abandoned because their parents have fallen into alcoholism, death or have been arrested and confined to jail.

It is sometimes hard to put into perspective, and especially into words, what a difference our CHRF Donors make in the lives of beautiful children from around the world. We have included a letter that was written to CHRF on behalf of our donors from a young girl whom we support in Trasnistria.

Because of Donors like YOU, this little girl, Rita, not only has a safe home to live in, food to eat, the means and necessary resources to attend school but most importantly of all, a foster family who LOVES her.

We have included her letter in this blog in order to share with our readers only a peak at the happiness, joy, love and peace that you help provide all over the world.

This is Rita writing to you. It is summer now and I don’t go to school. 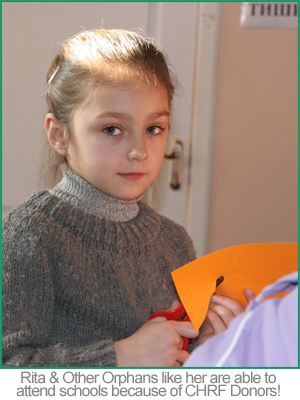 But it is interesting to stay at home too. I have a little niece. Her name is Polina. I love her so much! When I play with her, she always smiles and laughs, though she is four and a half months only.

Also we have a little kitten. Somebody beat it and abandoned it. My mother found it and brought it home. We called him Shrek first, but now we call him Marsik. He is so cute.

And a little bit earlier, some boys gave my mom a little owl. It was bitten by dogs.

The boys found it and gave to my mom. She nursed it and now it lives in the attic because it would be hard for it to live in a cage. Mom says when it gets stronger we will free it. But I don’t want to because no one of my friends has an owl but I have.

This year I will go to another school. My mom hopes that it will be better for me there. Thank you for everything you do for me.

Moldova remains one of the poorest countries in Europe despite recent progress from its small economic base. It enjoys a favorable climate and good farmland but has no major mineral deposits. As a result, the economy depends heavily on agriculture, featuring fruits, vegetables, wine, and tobacco. Moldova must import almost all of its energy supplies. Moldova's dependence on Russian energy was underscored at the end of 2005, when a Russian-owned electrical station in Moldova's separatist Transnistria region cut off power to Moldova and Russia's Gazprom cut off natural gas in disputes over pricing. In January 2009, gas supplies were cut during a dispute between Russia and Ukraine. Russia's decision to ban Moldovan wine and agricultural products, coupled with its decision to double the price Moldova paid for Russian natural gas, slowed GDP growth in 2006-07. However, in 2008 growth exceeded 7%, boosted by Russia's partial removal of the bans, solid fixed capital investment, and strong domestic demand driven by remittances from abroad. The country reversed course again in 2009, due to the onset of the global financial crisis and poor economic conditions in Moldova's main foreign markets, which dramatically decreased remittances. GDP fell about 8% in 2009.

Unemployment almost doubled and inflation disappeared - at 0%, a record low. Moldova's IMF agreement expired in May 2009. In fall 2009, the IMF allocated $186 million to Moldova to cover its immediate budgetary needs, and the government signed an new agreement with the IMF in January 2010 for a program worth $574 million. Economic reforms have been slow because of corruption and strong political forces backing government controls. Nevertheless, the government's primary goal of EU integration has resulted in some market-oriented progress. The granting of EU trade preferences and increased exports to Russia will encourage higher growth rates, but the agreements are unlikely to serve as a panacea, given the extent to which export success depends on higher quality standards and other factors. The economy is making a modest recovery in 2010 but remains vulnerable to political uncertainty, weak administrative capacity, vested bureaucratic interests, higher fuel prices, poor agricultural weather, and the skepticism of foreign investors as well as the presence of an illegal separatist regime in Moldova's Transnistria region. 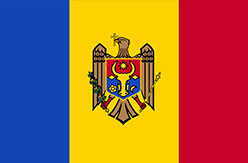